Moldovan delegation visiting Toledo area Officials aim to learn about local government
By CLAUDIA BOYD-BARRETT
BLADE STAFF WRITER
Northwest Ohio isn't usually a must-see destination for foreign visitors to the United States, but for five government officials from the Eastern European nation of Moldova this week, it's their primary stop. The visitors, three mayors and two council members from Moldovan towns and cities, arrived in Toledo late Friday as part of a delegation sponsored by the U.S. government. They will visit with area mayors, city and county administrators, education leaders, and business experts to learn about America's system of local government. "It's for them to come and see American democracy at work and how our small towns are governed," said Vera DeBuchananne, program manager for Moldova at the Open World Leadership Center, the federal agency behind the delegation. "This is an exchange of ideas and best practices, because we probably have as much to learn from them as they do from us." During their 10-day visit, the Moldovan politicians are staying with host families in Sylvania and Bowling Green. They will travel to communities in Lucas, Wood, and Ottawa counties and meet with a variety of local leaders, including the mayors of Maumee and Bowling Green, Lucas county commissioners, and city administrators in Oregon and Perrysburg. They also plan to attend a Toledo City Council meeting Tuesday. Topics for discussion include government accountability and transparency, tax collection, issues affecting rural communities, and economic development strategies. It's the first time a delegation from Moldova has visited the Toledo area through the Open World program, which since its inception in 1999 has brought thousands of young political, economic, and civic leaders from Eurasia to the United States. Participants in the program are selected based on their age - they must be younger than 45 - and their achievements in their local communities.

The officials are Ion Ion Bodrug, a city councilman in the city of Balti; Constantin Cojacari, the mayor of Edinet; Mihail Alexandru Mirzenco, mayor of Mateuti; Igor Ion Oboroc, mayor of Grinauti village, and Angela Alexandru Rusnac, a council member in the district of Soroca. An interpreter is accompanying them.

"These are the doers," Ms. DeBuchananne said, listing the visiting officials' accomplishments, which include implementation of water and other infrastructure projects in their hometowns. "We see that they're active, that they're involved in their community." The Open World program began as a way to improve communication and understanding between the United States and Russia, but has expanded to include almost all countries of the former Soviet Union. Moldova, a small landlocked country of just more 4 million people, became independent from the Soviet Union in 1991, but has struggled with economic problems and civil unrest. It is one of the poorest countries in Europe and depends heavily on agriculture, including fruits, vegetables, and wine. Lack of jobs pushes many Moldovans to emigrate to neighboring Russia and Ukraine to find jobs. The country is a parliamentary republic, a democratic system that differs somewhat from that of the United States in its distribution of powers. In 2009, Moldova's government was shaken by a wave of protests in response to election results. The unrest was nicknamed the "Twitter Revolution" because it was organized mainly via social networking tools. Despite Moldova's differences from the United States, delegation organizers said political leaders face many of the same problems at the local level of government. Those issues could include how to efficiently run a wastewater treatment plant or how to attract jobs or investment to local areas. For these Moldovans, the Toledo area provides particular insights because of its own economic struggles, its combination of urban and rural constituencies, and its rich cultural offerings, Open World program spokesman Maura Shelden said. "They could potentially each have a certain issue they're trying to tackle - maybe trying to improve a health system in their town or build investments," Ms. Shelden said. "They would hope to meet people who have done similar things for Toledo and see what projects have worked for them and see where they might apply." The Moldovans' visit also will provide an opportunity to enhance cultural understanding between nations, said Jacky Pauken, program coordinator for the Great Lakes Consortium, which is hosting the delegation. Ms. Pauken, who organized the home stays and has hosted foreign visitors at her home in the past, said families can learn a lot from the experience. "It's wonderful because you get an entirely different view of people from foreign countries when they're living with you," Ms. Pauken said. "You learn that basically … they're just the same as we are."
Publicat de Administrator la 21:15 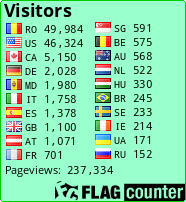